Winter is coming and the days are getting short,
It’ll soon be time to recharge the torch,
So don’t be winging about the cold dark nights,
Now I can go and make my own light. 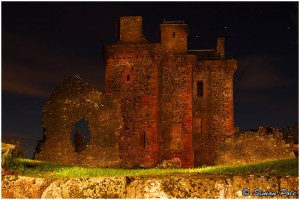 Balvaird Castle, near (ish) to Perth…
On a spontaneous, lets go out its only midnight and play with torches adventure, idea from Chrissie, so Chrissie, Rory and I headed out here to see what we could do.
I can’t really remember exactly who done what, but something like, Rory lighting the right and I the left and foreground, while Chrisse ran off with a flashgun and red gel filter.
Camera settings, 100 ISO, f5.6, 81 seconds on the bulb setting with a remote radio shutter release.
So hopefully some more of this kind of thing planned for the “Lighting Scotland” project over the winter months, at various locations, some well known, some not so well known.
As usual, I will be doing this with various people that are mad enough to come out and run about in the dark with things that glow.