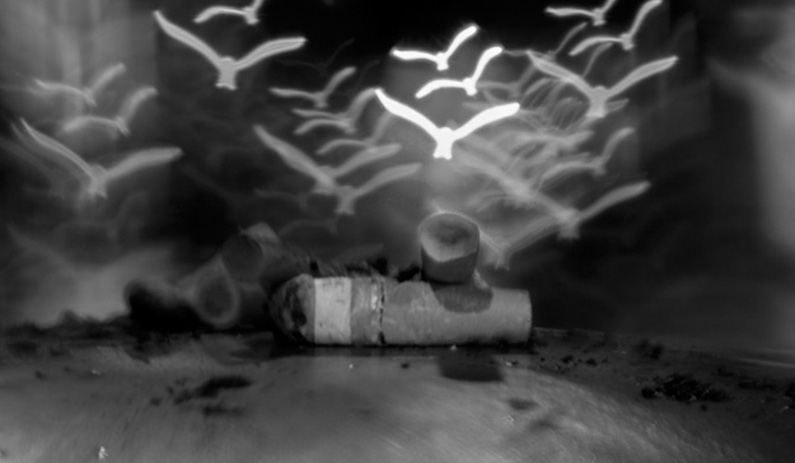 Panel Based Competition on Street Photography… 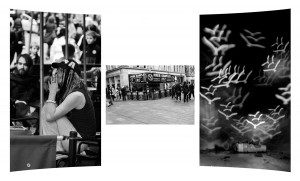 I don’t usually talk much about competition photography outside of a small group of peers, as I am usually ok with images I select to use for such things, however on this occasion the theme was on street photography for which a panel of three images were required, a panel is a set of images that have a common theme and link from one image to another. Street photography for me is pretty much way outside of my comfort zone because whilst I couldn’t really care less if someone comes up and makes a photograph of me (though if that happened it would be a pretty odd event as I’m really not that photogenic) some people don’t like that and I have to respect that, If I felt that way and someone came up and made a photograph of me, I think I would be a little annoyed, so that is my and indeed their prerogative, even though in the UK where I live, legally it is ok to do so on the street and in a public place, I feel it is morally and ethically incorrect, yes I have photographed a lot of people but all with prior arrangement, so not really the same. With all that said, I personally think you can go about street photography one of maybe three ways, covertly photograph people as you really record the moment as it happened, you can aproach someone and ask if it is ok to photograph them, so you cover the moral and ethical aspect, but in most cases you loose the spontaneity, so it’s no longer a record of true reality, lastly you can organise and set up a shot or a scene event with a friend, family member, willing “victim” or a model, this could actually work quite well, but still not a true reflection of reality. So anyway, this is the finished panel more or less as it was presented, no real result or chance of winning the competition, but that wasn’t really the point, which was pretty much to have a go at something I find challenging and also enjoyable, following I will post each image individually, my reasons for them and the judges comments, though just from memory so not absolutely word for word.  I chose Smoking as my topic as it is a pretty topical subject one way or another. 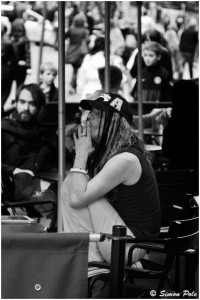 What I thought. A man enjoying a draw on a cigarette, (Fag UK slang) this probably actually looks better in colour, as you can see the glowing tip and colourful “dredlochs” at an outside street cafe, smoking now being illegal in a public enclosed space or premises, a sea of people milling back and forth in the background and another man looking on, my interpretation, looking rather disapproving of the smoker. What the judge said. I like this image as it has a fairly clear subject/theme, though I think it would be stronger if the composition was tighter to the smoking mans back giving more emphasis to the smoking theme I also think it could be cropped to remove some of the people in the background as I don’t feel they add anything to the image over all. 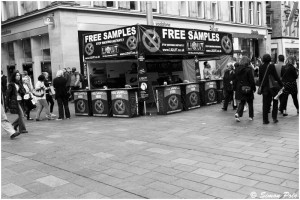 What I thought. A quit smoking street stall on a very bust street, with people giving it a wide birth, not really clear from the photo, well there’s a bit of a blooper, but there you go, but I found it interesting because despite the street being very busy, people voted with their feet, saying, hey don’t shove quitting in our face, if we really want to quit we will do it our own way. What the judge said. This doesn’t really say much to me, I see a quit smoking product stall, which is actually not straight, though not really a problem, sometimes its ok to have a photo that isn’t straight (oops, silly me) with a few people on the outside of the frame. 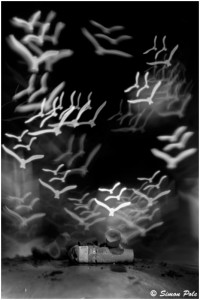 What I thought.. A pretty abstract street photograph. A street bin with the stubber on the top and some cigarette ends (dog ends UK slang) shot with a Lensbaby Composer with creative aperture kit two bird aperture disk, background street lights providing the specular highlights, to make the bird shapes more prominent, following on from the quit smoking image, free as a bird from the weed. What the judge said. I really like this and the thought that has gone into this image, though I will have to take the authors word for it that is is a street photograph as it is not clearly obvious, I’m not sure what it is trying to say, maybe the spirits or souls going to heaven after dying from smoking. Final thoughts. Having previously seen the judges own street photography, I can only say I am happy to have my efforts picked apart from someone that knows what they are talking about, total respect for someone that can do that to great effect, anyone that thinks street photography is easy, is far from the truth in my opinion. A little confession, knowing he also likes something a little abstract or off the wall, the final image was a bit of a strategic attempt to salvage what was otherwise a fairly bland attempt at street photography, so while the whole event was a bit of a non runner, I did at least get constructive feedback and positive comments on a strange image that he liked, so all not a total flop! This was actually supposed to be a few words and supporting images, but it turned into a bit of an animal, oops sorry. 🙂