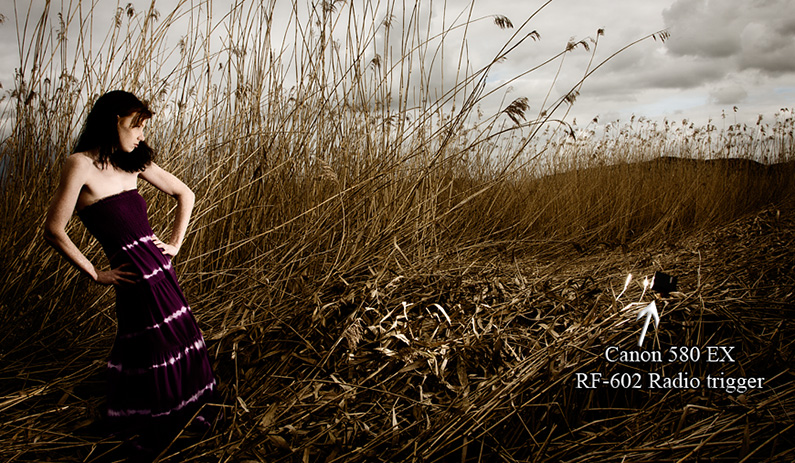 I get asked about this image quite a lot, so I decided to write a short post about how it was done.

Below are example images that illustrate the set-up and lighting, which in fact is a fairly simple unmodified single flash, placed on some reeds as there was no stable ground which to place a lighting stand, this of course breaks some rules, because the light is facing upward instead of the usual method of lighting from above. This can be problematic in some situations, particularly for a more full on head shot, but less of an issue for a model in profile.

This image can also be seen in the People and Portrait gallery, titled “Old Car” which has also raised a few questions being a rather odd title for a portrait, however there was a rusted out old car body buried in the embankment which I had to climb inside to get the position that I wanted to shoot from. 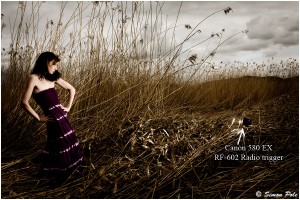 As can be seen here the flash gun is just carefully balanced on some reeds, appropriately 6 feet in front of the model, pointing slightly upward, the flash zoom setting is a secret, no, not really, it was set to 35mm. The overall scene was manually metered for flash at the models face with the background sky metered one stop below the flash exposure. 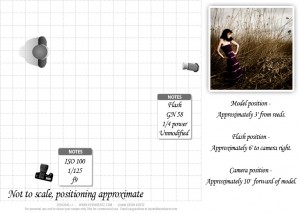 The flash gun used is a Canon 580 EX, but essentially not that important other than the fact it is quite a powerful flashgun and therefore was set at 1/4 power as stated in the lighting diagram, if using a less powerful flashgun you may need to have the output set higher, if you have a flash gun with no manual power control you can workaround this by moving it closer or further away from the subject.

The flash was fired with a RF-602 radio receiver with a transmitter on the camera hotshoe, therefore there was no E-TTL flash metering available.

I hope you have found this post interesting or useful, feel free to tell your friends or share the link.