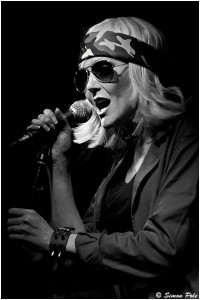 Some time back in October, in-between running around in the dark with torches, glowie things and sparks I had a by chance meeting with Sarah Kennedy, who just happens to stand out from the crowd, so being the inquisitive, erm (nosey), person that I am, I asked a few questions which lead to finding out that Sarah fronts a Blondie Tribute Band, Dirty Harry, there are plenty of web articles about them, so I’ll leave that for you to seek.

I expressed an interest in going along to a gig and doing some photography as it is something I have not done before and wanted to, well have a go, so I contacted their Manager Eileen to see if it would be possible, after a fair amount of e-mail ping pong, and in the meantime talking to Stuart about the possibility of doing some band photography, we had come to an agreement to attend a gig at the Electric Circus in Edinburgh, which ended up as three gigs over the Christmas period.

Difficult and challenging lighting conditions and something I had not really done before, resistance is futile!
Enough waffle, photo time…
Yeah, I know, corny as hell, but some things just have to be repeated 🙂

I know what you’re thinking. ‘Did he take six shots or only five’?

Well to tell you the truth, in all this excitement, I kind of lost track myself. you’ve got to ask yourself one question: ‘Do I feel lucky?’ Well do ya, punk?

The First gig was at The Electric Circus in Edinburgh and I was soon to learn hard lesson No1! We had arrived early in time for the sound check so we could do some test shots, it was darkish but manageable, the stage lighting was LED, but fairly even, it all seemed fairly straight forward, then bang, the band was on the lights dropped off a lot more and became very difficult to manage, well be careful what you wish for as they say, you may just get it! And get it I really did..
Stuart went down the snooted flash route, but I am far to stubborn and took the I will fight it, using a fast prime lens, hard lesson No2, mixed with some pretty hard to manage colours, along with the low light, in the end though I got some shots that I liked and the band seemed happy with, in the end I had learned a good lesson.

The second gig was at Wee Jimmies, Cowdenbeath in Fife, which was promoted by RubberStamp Promotions, a Fife live entertainment company.
Learning from the first gig, we decided to have a remote flash setup, as we use different camera and flash systems, this was easy to do without any chance of wireless interference, the venue was a lot easier to move around, the ambient lighting for the stage area easier to handle, we shot a mixture of subtle remote fill flash and non flash shots, for me this was probably the most productive of the three gigs and did not have any real problem with the lighting, just the usual high ISO shooting associated with low light photography, something I happen to like anyway.

The third and final gig of our little live music adventure was at the Renfrew Ferry on the Clyde, we went along early again and the band had invited us to join them for a pre gig meal, which was very gratefully received, well food is always a good thing!
If you have never been there, it is an interesting venue, with what is like a mini concert venue type stage, if you know the Glasgow Barrowlands Ballroom, imagine that in miniature and you may have the idea, unlike the Barrowlands in concert setup, there are tables all around the stage and above with a balcony area, this made moving around the venue a little tricky, but did provide a vantage point of sorts, to shoot from, another lesson I had learned, is that shooting the band as a whole was at best very difficult and I had set myself the task of doing just that, with the old, hold camera over your head, wait for the right moment trick, press button and hope!

So again, it was supposed to be a short blog entry, but I am what I am, a rambler, so it has turned into a bit of an animal, but if you know me, you’re probably not that shocked.

In closing, Dirty Harry are a great Tribute act to go and see and I would recommend that anyone that likes or remembers Blondie to go and see them if you get the chance, they are very authentic sounding and a lot of fun to watch and hear.

More photos from these and other gigs can be viewed in the Dirty Harry is a Band album.